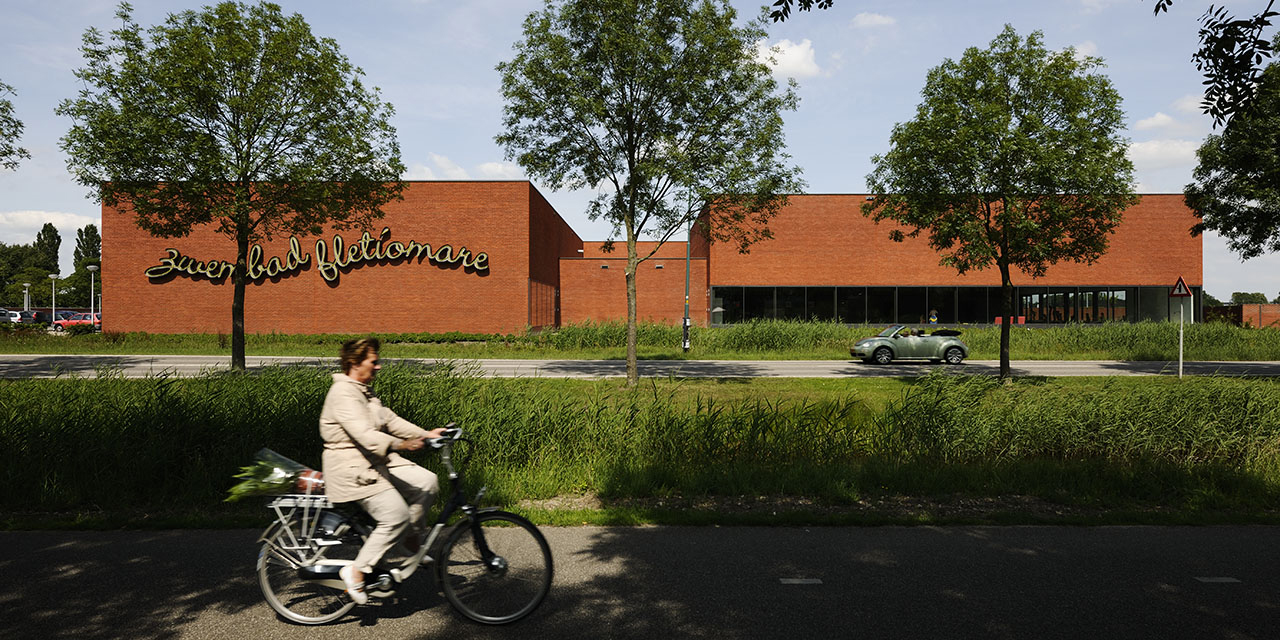 The swimming pool is placed close to the recreation park in the midst of the expansion district of Utrecht, Leidsche Rijn, namely the Leidsche Rijn Park. The Leidsche Rijn Park is designed by West 8, an landscape architecture firm that also supervised the planning of the swimming pool Fletiomare.The location is characterized by its rural features with grass fields, willow trees along ditches and trees without undergrowth. By placing the buildings parallel with the road in the middle of the lot four gardens around the building are created that each have their own character. The new swimming pool has an omnidirectional orientation to these gardens. The front garden situated at the ditch, the walled parking garden on a semi-asphalted terrain and replanted trees, the slow-traffic entrance court with its large gate that can be closed off and a walled garden with ornamental planting.

Because of the rural environment, we have opted for conventional materials which will be detailed in a modern way. We opted for brickwork fronts, but instead of the traditional window openings as perforation, the windows form one panel in the facade composition. All fronts have been designed in aluminum, including the balcony railings, ventilation openings and balustrades. So detailed that they tie in with the brickwork. The exterior is characterized by the brickwork and aluminum curtain walls, the aluminium compositions and the parapets, grids and steel-coated railings. It makes the building look very robust and sturdy and the quality of the building can be maintained with little effort. The details are modern.

The interior is characterized by the high-quality appearance of the dark tile-work in custom connections, fresh white and the luxurious appearance of American oak in railings and doors in the dry zone. Color accents have been applied to the mosaic work in the toddler pools, the lockers and changing rooms and the seats in the stand. Materialisation is typical of swimming pools and therefore guarantees a charming ageing process.